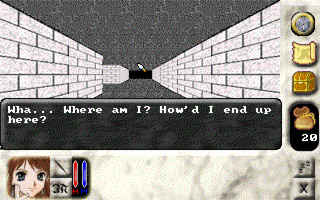 Before downloading the game, first I'd like to give you a disclaimer: this game is old, and written entirely in x86 assembler code... It wont even run on modern computers, but the download includes dosbox which runs it just fine (there are minor bugs, but nothing major). Also, while the game has never crashed a computer before, and it should be pretty well isolated within dosbox, I give no promises - use at your own risk yadda yadda. Also, I think almost none of the artwork was done by me, this was a school project, and I am not an artist. Credit goes where due (rpgmaker, diablo, don't even remember where else).

If you still want to play, feel free to download it here: fancyfishgames.com/AssemblerQuest/AssemblerQuest.zip . After it downloads, unzip it into a folder, and run Assembler Quest.jar - it will run dosbox and handle playing the music (hey, getting dos programs to play music is hard, and was not part of the assignment, so I cheated and wrote the sounds the dos program wanted to play to a txt file and had another application play them). Also, this download is for windows only, however theoretically it should work for other operating systems as dosbox is cross platform, let me know if there is interest in this.

Make sure you read the introduction, I don't mention the controls anywhere else (and if you drop a key, there's no way to win the game).

One fun known bug (if you're having trouble): Equipping and un-equipping the heal spell actually casts it at no mana cost! Speaking of which, I should update this page with a list of all the items and what they look like (it is never explained in game haha - have fun guessing what items do!)

And for fun, you can look at the (unreadable) source code: fancyfishgames.com/AssemblerQuest/game.asm.txt!